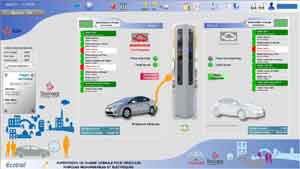 EDF (Electricity of France), Toyota and the Strasbourg area council have selected PcVue SCADA software, developed by ARC Informatique, for a joint three-year project titled Kléber. This is a full-scale experiment with a fleet of 70 rechargeable hybrid vehicles (RHV) and 145 charging stations throughout the Strasbourg urban area. Value for money, short lead times and industrial know-how all played a crucial role in the selection process.

In May 2010 Toyota, EDF and Strasbourg City and Urban Community launched a joint project named Kléber for full-scale demonstration of rechargeable hybrid vehicles (RHV). This three-year programme has three main aims: to study user expectations of RHV technology and recharging infrastructure, to verify RHV performance in real situations and to develop methods for evaluating fuel consumption and CO2 emission.

To manage the remotely metered portion of the charging data from the EDF stations, the sponsors of the Kléber project selected PcVue SCADA software developed by ARC Informatique. "This is a proven and reliable industrial tool that is used to supervise numerous devices in many large-scale projects around the world. Our choice was influenced by its meeting our specified requirements for performance and value for money." states Thierry Meunier, project manager at EDF Electric Transport and Vehicles. Examples of recent major projects in which the PcVue solution has distinguished itself include that of Iberdrola the Spanish power utility which selected the software to monitor its wind farms that generate 3600 megawatts from 35 separate plants in the USA.